There was a battle long ago,
Before America was dreamed and found
A battle fought and lost on Serbian ground
And known as Kossovo.

There was a Serbian king, Lazar,
Who, when offered earth or heaven by the Lord,
Led Serbians against the Turkish horde.
Chose an undying star.

Kossovo for five hundred years,
Was a battle never finished, till at last,
The mountains free, agony seemed to have passed
The place of skulls and tears.

But no, not yet may freedom go Redeemed.
Once more the Turks and heathen come
Across the broken bridge of Christendom
On the day of Kossovo.

Once more the hero calls to his men
And to unimagined armies from afar
And, by his death and by the undying star
Oh heaven, signals again.

And all the free have now one foe
And every freeman is a freeman’s friend
We come Lazar, to fight and win and end
Your battle, Kosovo.*

Witter Bynner
* Kossovo Day was widely celebrated in the West during the First World War.
. 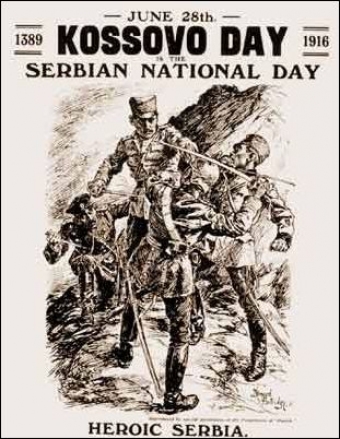 It is worth noticing how national history, only when transposed into a poem, becomes national treasure and is committed to legend.

Everything that had happened before is almost entirely forgotten; the memory grips that last of the nation’s splendor and its tragic end. The tragedy is described in several extensive poetic cycles.

The first poetic cycle starts by describing Stefan Dušan. Although he was blamed for bringing about the fall of the Empire, by creating very large provinces, here we can see him surrounded with several distinguished Serbian families whom he has to treat tactfully. From the very start, they are depicted in such light as is required for the developments yet to come: the Jugovichi are proud and hot-tempered, the Mrnjavčevichi act in collusion with demons and fairies. We see that immediately after the demise of Dušan, the Mrnjavčević’s grabbed all the power. History says that this was to due to the incompetence of the weakling Uroš, who is described as a forty-days old child at the moment of the father’s death. But not all members of the Mrnjavčević family are prone to using force. That same family gave birth to the national hero, Marko Kraljević (Prince Marko), who fears no  one except God. He disputes the right to the throne both to his father and to his uncles, giving it to the one to whom it rightfully belongs. Can a hero be more splendidly described? By doing so, he brings upon himself both a blessing and a curse, both of which will come true, and this is an indication of the developments to take place in the future.

Marko is cursed to become a Turkish vassal. The second cycle, entitled Lazarica, recounts how the country fell under the Turkish rule. Just like history, the poem also mentions the discord and treason which resulted in the disaster. There is, however, a painful feeling of doom pervading throughout this poetic cycle, a feeling that the tragic outcome was somehow meant to be. The tragic outcome is also anticipated by Miloš, the most excellent, most handsome and noblest of all Lazar’s heroes; the prince also receives bad omens from celestial messengers and on the eve of the battle, he give communion to his army; nevertheless, the courage of combatants is no less splendidly glorified, and a terrible curse is pronounced on a prospective traitor. A moving description praises the death of those who have fallen in the battle.

Marko did not take part in the Battle of Kossovo; the poem does not say why. The third poetic cycle is dedicated to him. The poem described him not as a man like other heroes, but as some kind of prodigy; he lives a long life of a hundred and sixty years, and for as many years he rides his horse whom he feeds with the same wine that he drinks himself; on horseback, he sits like a dragon on a dragon; no sword can kill him, and neither can a mace or a club; he pursues the fairy who inflicted a deadly wound on his blood-brother, high through the skies, catches her with the bludgeon and refuses to release her until she begs to become his blood-sister and promises to help him whenever he is in trouble, as well as to heal his friend. Since the legend has equipped this hero so wonderfully well, what deeds are ascribed to him? He serves the Turks. Yet we see that the neighboring kings invite him for religious ceremonies at the same time when the Sultan calls him to join him in his warfare. Being well aware of his duties as a Turkish vassal, he chooses to go to the war. However, while serving the Sultan, he refuses to take injustice, unlike the others. When a vizier breaks his falcon’s wing, he kills both the vizier and hs twelve escorts; he takes revenge on his father’s assassin and then, still smoldering with rage, with his fur-lined coat turned upside down, bludgeon in hand, he enters the Sultan’s tent. The Sultan, scared, steps backwards trying to appease Marko with words and gifts. Nevertheless, all this does not change the fact that Marko served the Turks, which is related in a number of stories about his adventures. When everybody else refuses to do so, Marko has to fight in a duel with the Arab who has forced the Sultan to pay him the dues and give him a daughter in a marriage, then with a Rabanase of demonic powers who hinders sailing on the seas from his tower; Marko also goes to pilgrimage and takes part in the collection of the “harach” (tax imposed by the Turks). He goes with the Turkish army all the way to Arabia. Through Marko’s character, the people apparently epitomized its servitude to the Turks in the early stages of its slavery. According to ancient books, after the Battle of Kossovo Serbian army took part in Bajazet’s warfare almost every year; in the battle of Ankara it almost single-handedly save the life of Bajazet’s son Suleiman and the what was left of the defeated Turkish army. But if it assisted one Turk and had greatly aided the establishment of Turkish grandeur under Mohammed I, for other Turks it was no less dangerous: Seleiman and Mussa experienced it well. The people was full of immeasurable strength and unwavering courage, but nevertheless, it was in chains. This is something that the people shows through its hero, endowed with all the virtues in which the nation believed, comprising in his character, perhaps, all the glory of the heroes of the times gone by. The people was well aware of the historical course of events and the battle which brought about its slavery, but the long period of slavery after the battle could only be depicted as a myth. Some poems say that God, “that old slayer”, finally killed this invincible hero. It is a poem very naive and full of ecstatic feeling. Some others express hope that Marko is still alive. As the legend goes, when Marko saw the first rifle and realized that it had lethal power, he retired into a cave in the high mountain forest. His sword still hangs there, his horse eats moss and Marko is asleep. Only when his sword falls, and the horse has no more moss to eat, Marko shall wake up and return.

All these legends are not recounted in a continuos series, but are contained in various poems, each of them having a separate focus; they have never been elaborated or put together by the creative mind of one poet, but yet they are all pervaded with an unvaried tone and spirit, the one and only popular perspective of the world, at the same time poetic and, apparently, one can not fail to perceive in them some supreme form of unity of the general subject matter. In this way the people, in the legend which is always alive and always young, keeps up the memory of its one-time greatness and the loss of its independence.